Note: The words “Thai” and “Jungle” were included as descriptors in the title and are probably not part of their real name (which eludes my lazy Googling at this point in time). Rather, I found them for sale at a roadside market stall surrounded by dense Thai jungle in a town called Koi Mek, in Kalasin province, on my way home from Nong Khai a couple months ago. 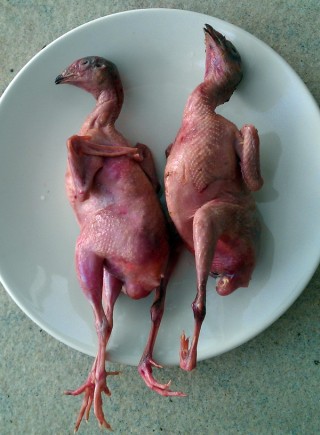 They were about 60 baht (less than $2) a piece, and the old lady who sold them to me said they were caught that morning. I took the birds and chased Max and Mina around with them, then gave them to our nanny to have her older sister cook at home. The next day, she brought a Thai basil stir fry prepared in my least favorite way – chopped in small pieces, bones and all – which was still mighty tasty if not entirely edible.