My car saved me.

My reactions saved me.

An inept mechanic almost killed me, and is now lying to save his job.

At about 10:00 this morning, I dropped off my car at a local garage called Prasertyon to get brakes on my just-restored Crown fixed. The brake pedal lost pressure yesterday and the brakes were locking on one side this morning, so it needed to be done.

Prasertyon had overhauled the entire brake system for me a couple years before, so I thought they would be familiar with my old car and do a good job… Nam and I piled the kids in her car and went to see if my car was finished at 5:00 pm. The kids fell asleep in their baby seats on the way, and when we arrived a couple mechanics were out testing the brakes on my car. As they pulled into the shop in my car, a good friend was passing by and came up to see what I was doing. This is important because he became a second witness to what happened soon after (the first witness being my wife).

I was told the repairs were complete, then was presented with a detailed bill. It came to a total of 1,000 baht for some replacement parts for the rear brakes, brake fluid, and labor (notably including setting the brakes for all four wheels). 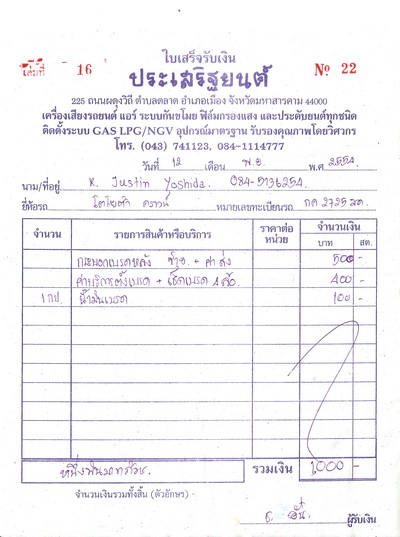 Assured that the necessary repairs had been performed and the car tested by the mechanics, I left for home. I pulled away from the shop, with Nam and the babies in her car behind me, and my friend close behind them in his pickup. Less than half a kilo down the street from the shop, I was cruising at normal speed, within the speed limit, when I tried braking. The brakes completely locked up, unevenly, and the front of my car pulled sharply left. Suddenly, I was sliding sideways toward a curb, going fast enough to get flipped in the air. Instinctively, I wrenched the wheel to the right and the car straightened out enough to get launched in the air pointing forward, knock down a traffic safety sign on a steel pole, then come crashing down onto the asphalt, jump another curb, and finally smash headlong into a squarely-molded concrete power pole.

Nam had started pulling over when she saw/heard my brakes lock and saw the whole thing. She said she just went numb when it seemed my car was going to cartwheel. She was amazed when I opened the door and got out of the car. My friend following in the pickup also thought I must have gotten hurt pretty bad, at least. As it turns out, I hit my head pretty hard and will probably feel whiplash from tomorrow. I was bleeding a bit from a scrape on my forehead and probably scared everybody who came to rubberneck. I eventually went to the hospital to get a CT scan, and just heard back by phone that everything is OK. So I’m physically fine, and will come away from this just being a bit sore, hopefully.

After the accident, Nam went back to the garage to get help. A few guys came on a motorcycle and got the car started again, and eventually drove it back to the shop. We talked to one of the (presumed) owners of the shop, who started out saying they would pay for 50% of the damage, but within the period of me going to the hospital seemed to be trying to shirk responsibility altogether. Apparently she told Nam that once the car leaves the shop, the shop isn’t responsible for it anymore. I think I’ll let her think some more and revise her statement tomorrow; it makes me too mad to think about it right now. Plus, the mechanic who actually made the repairs is saying that Nam said something to him admitting guilt on my part, which is ridiculous but I guess he’s afraid of getting fired or something… Anyway, we have a meeting with the shop’s owners tomorrow afternoon, and my ruined car is there. They can conjecture about what happened on the road, and try and place the blame on anybody but themselves because they’re pissed about possibly losing money, but I hope they do the right thing, I really do. Because at this point, I am not to be fucked with. My car is pretty much irreparable (key parts are completely mangled). I almost died in front of my family. I at least want an apology, quick repayment for my medical bills, and some kind of repayment for my ride… We shall see.

The funny thing is, I was going to take the first photos of my completed car tomorrow. It just happened a day earlier. 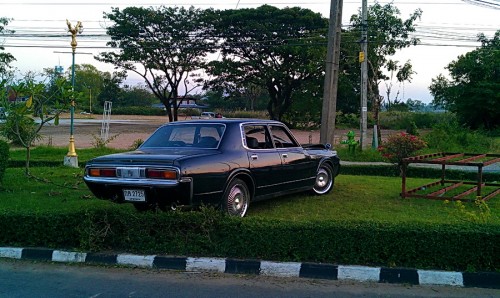